Side tracked and delayed by failed communication, flawed assumptions and the death of a battery

I was working on setting up a VM server when I realized.. My desk was a mess.  I had no room for another mouse, keyboard and monitor ; so I cleaned my desk and remembered that I had a rack mounted monitor, keyboard and mouse tray that I had salvaged and repaired a couple of years ago.  The problem is I don’t have a server rack.  So I measured the device (1.8x19x24) a went to Home Depot for a few 2x2’s and 1x2’s.  If figure all I really need to do is build a small “U” shaped shelf with an open back for device and mount it under my desk.  It seemed like a construction task even I could handle.

And so begins my spiral into sadness.  I got to Home Depot and told them I need 2 boards measuring 2x2x20 and 4 boards measuring 1x2x20.  They were nice enough to cut the wood to the right length for me since they were sold in 8 (or 10) foot lengths. I was on my way with my professionally cut boards in hand.

Let’s be clear, I do not visit Home Depot often…or ever, the round trip is a 30 minute drive and as a software developer I avoid projects that involve… labor. 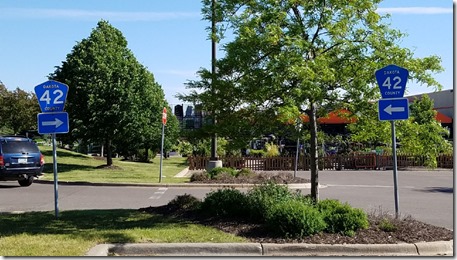 So as I tried to find my way out of their parking lot and onto county road 42….I was a tad surprised by the signage (See the photo).

Ok, I was amused and returned home to build my shelf.  When I got there I took care of a few items on the “honey-do” list and returned to building my shelf.  I set the 2x2 down next to the device and found it came up short.  Puzzled I re-measured the device and it was still under 2” high.  I measured the board and it was 1.5 inches tall.  I looked at the sticker on the board and it said 1.5”x1.5” well shoot.  I returned to home depot and a different member of the staff –Tom- walked over to the bin with me and verified it was the 2x2 bin but the boards were all marked by the manufactures label as 1.5x1.5.

After a little while Tom returned with 2x2’s cut down to 20” for me an apologized for the mistake.  So I returned home to build my shelf… or so I thought.

After talking with a 3rd staff member they returned to boards, and I went down to the lumber isle and started measuring the 2x2s.  They were all 1.5x1.5.  So I went across the street to Menards and told the guy in the lumber department what I was trying to do and his answer floored me “Yeah, I’ve been a carpenter for 30 years, and a 2x2 has always be 1.5x1.5.  I don’t know where you can find a true 2x2 unless you rip a 4x4 on a table saw… but a 4x4 isn’t really 4 inches either so don’t cut it down the middle.”

After poking around the lumber department, I found some 2” molding -which really measures as 2 inches-, had them cut into 20” lengths and called it a day.

After 3 trips to Home Depot, a trip to Menards, an hour+ in the car and more than a few curse words I reflected on the whole experience.

So what could I have done differently?  I’m not sure.  I believe the issue here is that Tom and the other folks at Home Depot simply did not know that a 2x2 is really 1.5.

If you break this down, I -the “PO”- said here is my business requirement, the implementer provided the result and they did not match.  Why? Because there was not a subject matter expert to say, “wait, they need a board that is 2 inches by 2 inches, not a 2x2.”  When I went to Menards, I found a SME and the issue was resolved.  I did not tell him anything different than I told Home Depot on my second visit so I do not believe it was an issue of miscommunication or an unclear requirement but rather a problem of the lexicon.  The stores lumber inventory uses a carpenters lexicon while Tom, myself, and the other HD staff did not.  By assuming the people I was talking to were a SME with the proper lexicon I started on a flawed path that I could have discovered with a tape measure and 1 minute.  But hey… I am not a carpenter.

Once I had the correct boards, building the shelf was delayed because the battery in my drill died; I finished it the next day and the shelf with the rack mount monitor/keyboard/mouse works perfectly.

PS About the signs,

I am not the only one who has been confused by the way lumber is measured-  I don’t really agree with the lawsuit; after all it is their industry standard and all sorts of other things wouldn't line up correctly without it when building a house, but – based on my experience- I don’t agree that a 2x2 or 2x4 is a well understood naming convention by the staff at Home Depot.